Chat with us, powered by LiveChat Why Everyone Needs a Silkie Chicken | Chicken Coops and Tractors Australia

Why Everyone Needs a Silkie Chicken

Why Everyone Needs a Silkie Chicken

The silkie chicken is a unique and highly desirable addition to any flock. She gets her name from her soft, poofy plumage which is said to feel just like silk. While the silkie chicken likely originated in Asia, this poultry breed has spread all over the world. You can expect to see them at poultry shows, exhibitions and on many family farms.

The silkie chicken is special in a number of ways. In terms of strictly physical attributes, here is what makes them so distinctive: 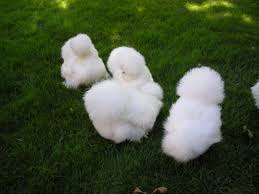 It’s not hard to see why many people want a few silkies around the farm. They are beautiful birds. But their value is more than skin deep.

Silkie chicken eggs are light brown and delicious. They are smaller than large or jumbo store-bought eggs. When baking with silkie eggs you’ll need to use two eggs in place of each large egg. You can expect 100-120 eggs per year from each silkie hen.

A silkie chicken wants nothing more than to be a mother, and she’ll accept any eggs you offer. If you want to raise chickens naturally, without and incubator or brooder, you’ll need a broody hen who is also a good mother. Silkie hens are exceptional. In fact, their broodiness is often seen as a fault because a broody hen stops laying and thus produces fewer eggs. You may not want a whole flock of motherly birds, but a silkie chicken or two can provide lots of baby chicks. They will happily raise their brood with little help from you. Even silkie roosters are good with chicks. 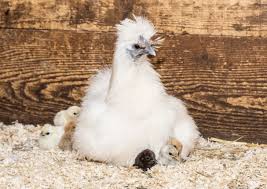 The Downside to Raising Silkie Chickens

The soft and startling feathers of a silkie chicken make nasty weather difficult for her to tolerate. While beautiful, their feathers are not very insulating, so they do poorly in cold weather. Mud and snow stick to them and can make a fast mess of your lovely birds. Silkie chickens should be kept in clean, dry environments. They have even been raised successfully inside apartments!

Silkies have lovely personalities. They are among the friendliest of all the chicken breeds. Yet this softness often leads to their being victims of bullying in the coop. If you have other breeds or aggressive birds you’ll need to keep your silkies apart.

Are you ready to add a silkie chicken to your flock? You can find female silkie chicks for sale from a number of breeders. Silkie Coop frequently offers beautiful lavender silkies chickens for sale.

Guide to Backyard Chickens & How to Raise Chickens

Check out silkie chicken Penny and her best friend: a chihuahua confined to a doggy wheel chair.