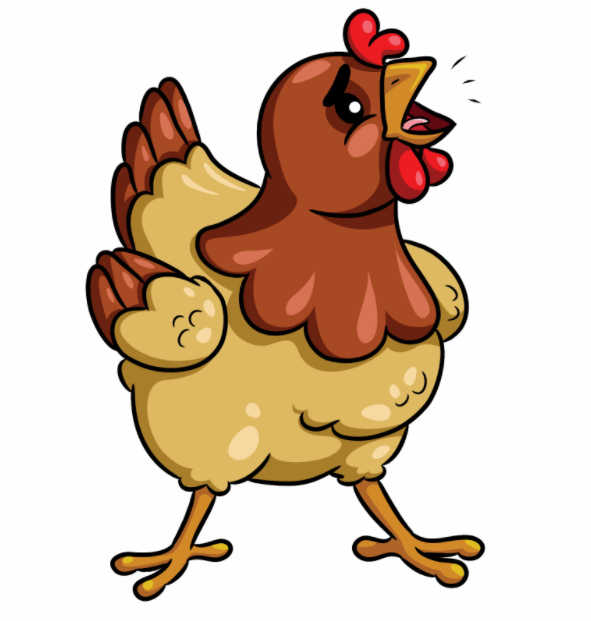 So you have a wonderful flock of hens that get along just splendidly, until… ‘Caaa-Cawww’. Now you are really confused, did the neighbours just get a rooster? The next morning you hear the same thing, but now you’re sure the neighbours definitely do not have a rooster so what’s going on with your girls?
During your morning egg collection, you notice some pretty uncharacteristic behaviour from one of the hens in your flock. She seems to be attempting to mount the other hens and is acting quite aggressively. So what’s wrong? This is definitely not normal, right?

Wrong, it is quite normal for a hen to display male-like behaviour and to take on other masculine traits. In a flock with only hens, the top hen in the pecking order may try to take on the role of the rooster. She will attempt to crow, mount and fight just like a rooster does.
Let’s look into some rooster traits to get to know your crowing hen a little better

Why Do Roosters Crow?

If you think rooster, the first thing that comes to mind is the loud, attention-grabbing crows. There are numerous reasons for a rooster to crow such as:

How To Stop Your Hens From Acting Like Roosters

Most hens will grow out of their rooster-like behaviour, especially when they are coming into lay. Some birds, however, continue this aggressive behaviour and can pose a threat to the other hens in your flock.

To help your confused chicken, it is best to isolate her for a few days. After some alone time, you should notice a change in behaviour and she will revert back to her happy hens self. Isolating her will cause her to lose her place in the pecking order and thus put her below everyone else when she gets reintroduced. Since she has no reason to keep her image as top hen, she will no longer feel the need to act like a rooster to keep her dominant spot and peace should be restored.

In some cases, your hen will continue to act like a rooster despite isolation. You may notice a reduction in egg production or a complete lack of laying. Your girl may also start to grow male plumage and a more established comb and wattles. This occurrence is quite rare, but your hen has just gone through a sex reversal and has turned into a rooster!

This may seem impossible to you, but it has been given a 1-in-10 000 chance of occurring. A hen to rooster transformation is most definitely possible no matter how impossible it may seem.
This occurrence usually occurs due to a genetic condition where the chickens only functioning ovary is damaged. The non-functioning ovary can then start to develop into a structure known as an avo-testis. The avo-testes produce male hormones and are responsible for the change that made your hen into a rooster.

The transformation into a rooster is not complete, however, the hen will just become phenotypically male. She will develop physical male characteristics and stop laying eggs, but she will remain genetically female. Despite looking like a rooster, she won’t be fathering any chicks since these hens become infertile.

This means that if you catch any of your hens acting like a rooster, you should take immediate action to stop the behaviour. If the behaviour continues despite your efforts, you should keep a close eye on your hen for any change in characteristics. Hens that turn into roosters should be removed from the flock and rather be kept as a pet to prevent unnecessary injuries to the rest of your girls.