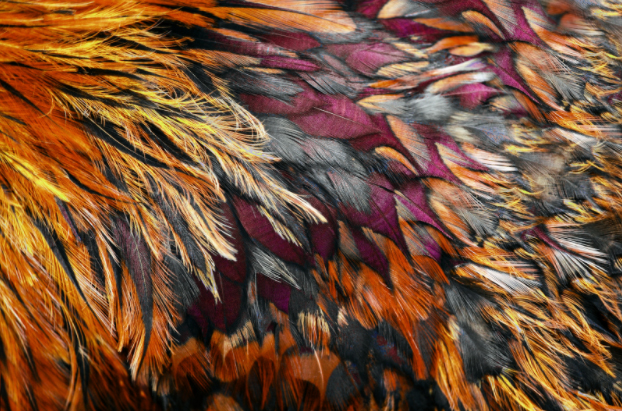 Feathers are unique to birds and while they do look pretty, they do have other functions as well. Feathers are very important for flight and despite chickens having poor flight, they still serve the purpose of allowing fowls to fly short distances.
Feathers also act as insulation keeping chickens warm in cold weather and protecting them from the sun’s harsh rays. Maybe the second best-known purpose of feathers is the role they play in attracting a mate.

Chickens have four main types of feathers that cover their bodies. These feathers are down feathers, contour feathers, semiplumes and filoplumes. Each feather has a different structure and serves a different purpose.

The down of a bird is the very fine, fluffy layer of feathers that usually cover young birds like chicks completely until they grow their adult feathers. In adults, they are found under the tough exterior feathers. Down usually covers a chicken’s abdomen and serves as insulation by trapping air and heat against the chicken’s body.

Contour feathers are a bird’s outermost feathers and cover the wings, tail and body. They are responsible for the colour and shape of your bird and are often used to distinguish chicken breeds. Contour feathers have a well-developed shaft with barbs branching off of them.
The tiny barbules that extend from the barbs lock together to create a smooth, neat plane. Some breeds have quite distinct contour feathers with a different structure and appearance and help to distinguish a specific breed. Contour feathers can either make a chicken look big and shiny or windswept and fluffy, it all depends on the structure.

Hackle feathers are a little like a dog’s hackles and can be controlled by the bird. When they feel threatened or want to intimidate a fellow chicken, their hackle feathers will be raised. Hackle feathers can be distinguished by the long fine feathers covering a chicken’s neck and saddle.

Secondaries are smaller flight feathers positioned behind the primaries and grow out from the chickens ‘forearm’ area of the wing. These feathers are responsible for providing lift in both the soaring and flapping functions of flying.

You will be able to find the semiplume feathers hidden between the contour feathers that cover the body. The main function of these feathers is to act as insulation to keep the chicken warm. They also help the bird to maintain a smooth, streamlined appearance. These feathers can be distinguished from contour feathers by the absence of the hooks that hold the barbs together. They are softer in appearance than contour feathers but harder than down due to the shaft.

Filoplums are situated at the base of each contour feather. They are stiff and hairlike in appearance but lack specific feather muscles. These feathers are instead supplied with nerve endings that react to help keep the contour feathers in position.
A feather isn’t just a feather. There is more to each feather than meets the eye. Make sure your chickens have a proper diet to keep their feathers healthy and your chickens functioning as they should.