How to Protect your Chickens from Quolls 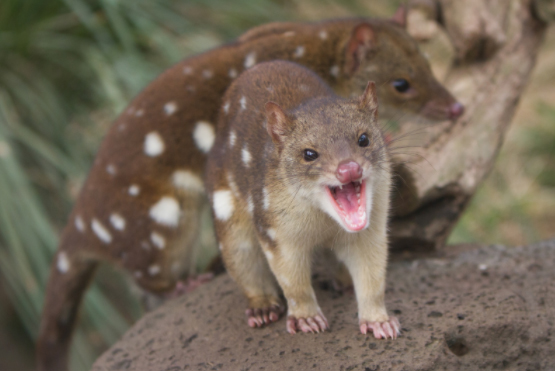 There are only a few areas in Australia that Quolls call home, so they may not be a threat to your flock. If you do live in an area known for Quolls, you will have to take precautions against them without putting them or your flock in danger. Quolls are an endangered species so no matter what you do, try not to hurt or kill one.

A quoll is a small, carnivorous marsupial that can be distinguished by the pattern of its fur and sharp teeth. These sneaky critters prefer to be active at night time rather than during the day. Their diet consists mainly of small animals which unfortunately includes the chicken and its babies. They have sharp retractable claws like cats which allows them to climb trees or even your coop. Small quolls generally live for around 2 years, with larger quoll species being able to live for up to 5 years.

There are 4 known species of quoll living in various locations around Australia with the majority found in Tasmania. These 4 species are known as: Quolls can be found in both suburban and rural areas within their distribution. They are, however, regarded as extinct in Queensland. These clawed creatures predominantly hunt by using their teeth and claws. Your chickens will only really be on the menu if your chickens have poor housing and lack defensive abilities such as flight.

How To Protect Your Flock

If you live in an area with Quolls, it is best to be prepared before you lose some of your flock. Quolls are great diggers and will often dig into your coop if given the opportunity. For this reason, you will have to make sure that your coop has a strong foundation. There are a number of ways to strengthen your coop foundations such as moving your coop onto a concrete slab, Digging a barrier around 30cm deep and filling it with concrete, bricks, wire or timber or use strong galvanised mesh as a floor in your coop. On top of all of that, you can also add some other features to help deter Quolls such as: This light automatically goes on when there is movement outside your coop and will serve to scare any approaching Quolls. Electric fencing will give the endangered Quoll quite a scare without actually injuring it. This door will help ensure that your chickens are safely locked inside the coop after the sun goes down. The most valuable asset in this situation is a secure coop. If your coop is a bit old and falling apart, it might be time to upgrade to a more secure coop to protect your flock. A secure coop requires excessive amounts of energy to breach and will usually have predators going off to search for an easier meal elsewhere.

Quolls are a protected species on the verge of becoming extinct. It is vitally important that no harm comes to one no matter how annoyed or upset you might be, you will find yourself in a lot of trouble. If you have Quolls in your area, contact your local council to safely remove them. This whole situation may seem daunting, but don’t stress, Many chicken keepers have succeeded in keeping their flocks safe, so can you! If you feel that your coop is lacking in security, try out the methods we mentioned above to make it more secure.