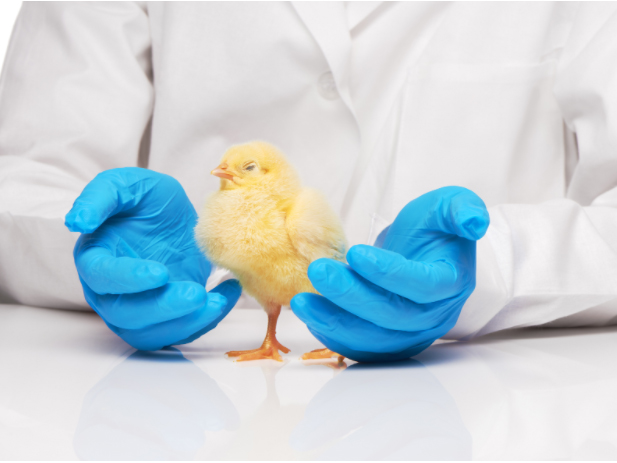 Getting your first baby chickens, either through hatching or buying, is a beautiful moment you probably have been looking forward to for months. Sometimes, unfortunately, the road to adulthood is not a smooth one and your babies can be facing some serious health problems. At least many health problems a chick might face can be rectified with the proper care and treatment if recognised early enough.

It is best to prepare yourself beforehand so you can recognise early on if one of your chicks needs urgent medical attention so here is a list of common health problems in baby chickens.

Pasting up, also known as pasted vent, is a common problem in young chicks. The condition can be recognised by droppings building up around the vent area blocking the vent. This condition can be caused by incorrect incubation temperatures, ingesting something strange or stress.

If the condition remains untreated, it can turn into a serious health risk for your baby chicks. Pasted vent can lead to infection, serious damage to the intestines and potential death. Fortunately, it is easy to treat.

All you have to do is put some lukewarm water in a bowl, take a washcloth, dip it in the water and wipe the baby chickens vent until all dried poop and other debris have been removed. Make sure to be very gentle since too much pressure can cause damage to the vent further putting the baby at risk.

Splayed legs, also known as spraddle legs, is a condition where the legs of the baby chicken are stretched out on either side of the body instead of being under them like normal. Splayed legs can be caused by an overcrowded brooder, incorrect incubation temperatures, problems during hatching or a lack of nutrients for proper development.

This condition doesn’t necessarily pose a health risk, but it will severely impact your baby chickens quality of life. It will be unable to walk around or function like a normal chicken. Early detection of this problem is key for a proper recovery. The sooner the condition is discovered, the better chance the bones will have to grow and heal properly.

You can try to prevent splayed legs by covering the floor of the brooder with strips of paper instead of shredded material while the legs are still growing stronger. Unfortunately, this condition cannot always be fixed. You will have to make a decision based on the quality of life the chick will have if this happens.

Twisted neck, also known as stargazing or wry neck, is a condition during which the chick cannot hold its head up properly causing the head to fall back onto the back causing the chick to gaze upwards. Chicks with twisted neck are unable to walk properly.

Some of the causes of twisted neck include genetic abnormalities and a lack of nutrients including vitamins and minerals. Twisted neck in itself is not fatal, but your baby chicken will be unable to walk normally and thus cannot partake in normal chicken activities.

This condition sometimes responds to treatment with vitamins and minerals. Administering vitamins and minerals can sometimes cure twisted neck in a matter of hours, some do take weeks to recover completely so don’t get disheartened too quickly. You can try vitamin E with selenium (very important!), water-soluble multivitamins, probiotics and electrolytes to treat twisted neck. Make sure to consult a vet before administering anything and keep to the correct dosages.

Scissor beak, also known as cross beak, is a condition where the top and bottom halves of the beak don’t line up. Scissor beak is caused by a genetic condition and thus you should never breed a chicken that has or had scissor beak.

Scissor beak can be treated, but it is not an easy procedure. Sometimes the only solution is surgery, but you can make their life a little easier with small adjustments to their feeding.

You can try to lift the feeder to the chick’s shoulder height making it easier for them to access. You can also make the feed moist to make it easier for them to peck at. As mentioned above, it is advisable to have a separate feeding area so they don’t get bullied away from the food by other chicks and chickens.

Coughing, sneezing and runny noses may be an indication that something is wrong with your chicks. Sometimes the fix is easy and as simple as changing their bedding to something less dusty, but other times it can be a sign of something far more serious.

Respiratory distress can be caused by a variety of things. Some of these things include dust in the brooder, using very fine cedar as bedding, brooders that haven’t been cleaned properly, viruses and bacteria and other more serious conditions.

To treat respiratory problems, make sure to thoroughly clean the brooder without using harsh chemicals, instead use vinegar and water. Replace the bedding with a less dusty variety. You can add herbs to the brooder such as thyme, basil and dill. If any symptoms don’t clear up within a few days, consult a vet it could potentially be something more serious.

Many chicks grow up without a hitch so don’t get deterred just because there is a chance that something might go wrong. I know it can be overwhelming, but it really doesn’t have to be. Just be prepared if something goes wrong and enjoy your chicks to the fullest.