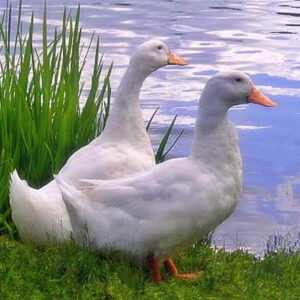 While there is a difference of opinion on whether or not there are still Aylesbury Ducks in Australia, these white ducks may be hybrids or purebred “English Ducks”. Pekin and Aylesbury are both known as “English Ducks” and those in Australia may be a mix of the two breeds or possibly pure Pekins. They are not generally broody and are also not good layers. They are mostly kept as meat birds. The eggs are generally greenish-white and are most often bred out in incubators or under surrogate parents. Aylesbury ducks are white but have pink beaks as opposed to the usual orange. The purebred ducks are fairly rare around the world.

The ducks originated in Aylesbury in England, hence their name. They have since become the heraldic emblem for the town as well. The breed was developed in the beginning of the 18th century and the ducks were bred by many small breeders at the time. When it came time to sell the ducks, they were walked to market in London. This was over 60km of walking, stopping along the way for rest and sleep at inns which had large enclosed yards. The innkeepers were paid with a bird or two as compensation. The birds feet were protected on the walk by having them walk through a weak tar-like solution and then through sawdust, creating a barrier between their feet and the roadway. Later on the ducks were transported by rail and the industry flourished. In the mid-1800s many people stopped rearing ducks, leading to a decline in the trade. In the third quarter of the century the Pekin duck was introduced. They were cross bred with the Aylesbury, making the pure breed bird much rarer. Over the last century, there has been a drive to re-establish the pure breed of Aylesbury. The breed is bred globally due to the high quality of meat from this bird.

The Aylesbury is a glossy, white feathered duck with a pink bill. The legs and feet are orange in colour. The pure strain has the pink bill while other white ducks may have a yellow or orange bill. This would indicate that they have been crossbred with a Pekin or hybrid and are not pure Aylesbury. They are also quite large domestic ducks and are usually only outweighed by the Muscovies. Drakes weigh in at around 4.5kg to 5.5kg full grown, while hens weigh in at 4.1kg to 5.0kg when mature. They should have a keel which is parallel to the ground. It should touch the ground when the bird is standing still. This is known as a horizontal carriage. They have a prominent breast with a long, broad body and walk with a waddle. Their head is large and straight with a bill of around 15-20cm long.

These ducks are making a comeback and while fairly rare due to them being bred with Pekins in the past, the breed is slowly coming in to its own once again. They are beautiful looking ducks and are perfect for backyard breeders that want to breed ducks for meat or simply as outdoor pets. They are not recommended for eggs and if you plan to breed, you would need an incubator or another species or breed that tend to be more broody to incubate the ducklings.