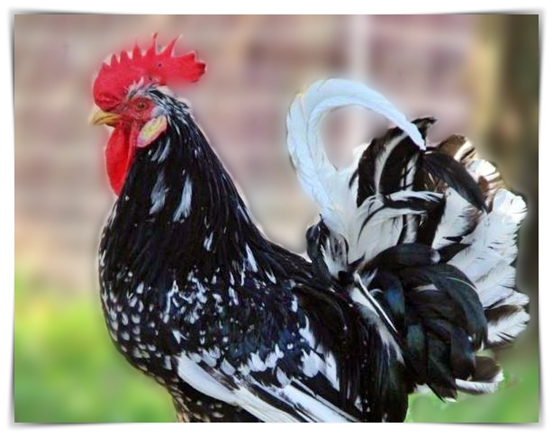 The Ancona chicken breed is originally from Italy and named after the port of Ancona. These chickens are usually a mottled black and white in colour and have a single or rose comb. Their legs are yellow and mottled with black and are not feathered. They are available in large fowl and bantam versions and are kept mostly as egg layers. They average around 200 medium to large white eggs per year. They weigh in at around 1.8 to 2.8kg fully grown and are considered fairly common in Australia, while they are rare in their original country.

These are not particularly docile chickens but can become calmer if they are handled regularly and firmly. They are hardy chickens that can handle cold weather better than most and also do well in hot climates. They are not known for being especially broody. They are generally very curious and active chickens and may spend their evenings roosting in the trees if they are given the opportunity. They prefer a larger space to roam and if kept in coops, you would need to ensure they have enough space per chicken. They are perfect free range chickens as they love to roam around. They are hardy, rustic chickens that head for higher spots if startled.

These chickens are very popular in the UK and are becoming more so in the USA. They are not uncommon in Australia although perhaps not as well-known as many other breed. They have a soft, light feather and sickles, primaries and tail feathers should have a white tip. Every 3rd feather should have a V-shaped marking on the tip. The white markings grow longer as the chickens age so it becomes easier to identify the older chickens in your flock. The black feathers glow with a greenish sheen. Blue-black is recognized as a variation in the larger chickens, but not in the bantam version. In Australia, a red variety is also recognized which can be chestnut to bay in colour.  These birds are often seen at shows where their striking good looks often win some choice awards.

They are excellent foragers, which can save you a lot in chicken food if you are planning on some free rangers or if they are kept in tractors that are moved often. They also make good watch dogs in a mixed flock as they startle easily and will alert the rest of the flock to dangers. Economical, bold and great egg producers make these chickens a good choice for a strong, backyard flock.